Just in case you forgot, there's still time to cast your vote for the European Tree of the Year 2019  at https://www.treeoftheyear.org.  This competition to determine the "most lovable tree in Europe" has entrants from several countries.  In order to be considered championship timber, a tree can't be too twiggy or spriggy, and it especially can't be one of those small, knobby trees whose bark is worse than its height.  But don't get the impression that only looks count in this contest. Personality and accomplishments matter a great deal to the judges, with the title usually going to a tree who is the most outstanding in its field ... or park or meadow.  Of course, throughout 2019 the duties for the winner will include acting as grand marshal of local parades and promoting awareness of tree-related issues at elementary schools. And I don't think I'm going out on a limb when I say that the organizers of the contest have plans to branch out to North America in 2020. 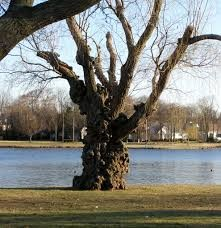