In this time of technological and social upheaval, it can be enlightening to see how earlier generations handled change. For one pivotal example, let us look at English author Jonas Hanway, who was the first man to use an umbrella in the streets of London way back in the 1750s. Jonas endured much snickering as he strolled by his fellow citizens on that wet, drizzly day; but one group in particular took umbrage with his umbrella: the coach drivers of hansom cabs. (This can be a misleading term, so just to make clear: hansom cabs are two-wheeled horse-drawn carriages, and not a taxi service used exclusively by good-looking fellas like Brad Pitt, Rudolph Valentino, or financial newsletter writers.)

Anyway, covered carriages had become the go-to refuge from the rain for pedestrians, and gloomy London weather had made for booming business. Now, drivers saw Jonas Hanway's umbrella as a threat to their livelihoods, so they heckled him mercilessly at every opportunity. One cab even tried to run him over, but Mr. Hanway claims that he used his umbrella to "give the man a good thrashing."

Although Londoners would eventually see the light about umbrellas, Jonas Hanway kept a grudge against the coachmen who had belittled him. He would occasionally hurtle his umbrella at them when they weren't looking, and his disrespectful actions would be the origin of the slang term "to throw shade at someone". 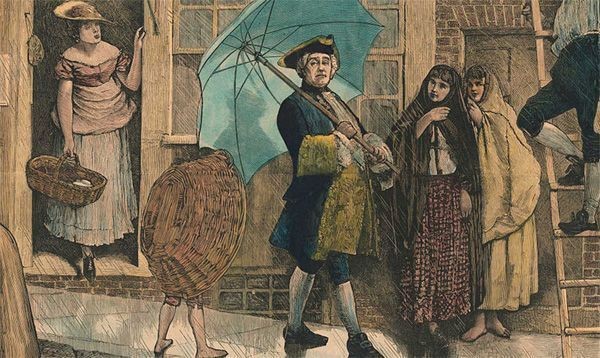 Jonas Hanway and his umbrella. Next week's "On the Lighter Note" will cover the story of how the first man to wear galoshes in Venice was assaulted by a gaggle of grumpy gondoliers.