This June 9th, the world will celebrate the birthday of Walt Disney's greatest hero: Donald Duck.  For on that day back in 1934, the emphatic and aquatic cartoon character made his debut in the short film The Wise Little Hen. What makes Donald so great? Well, while company men like Mickey Mouse and Goofy remained imperturbably happy in any cartoon regardless of the mediocre dialogue or poor plot structure, Donald never held back a quack attack when he felt disrespected. In fact, he so eloquently expressed the everyday exasperations of the average person, we were willing to forget the fact that he never felt it necessary to wear trousers in public. And we can only assume that with his sailor suit uniform, Donald was showing his pride in some past military service. So, with all of these facts, we think you'll agree that there is nothing lame about this duck. 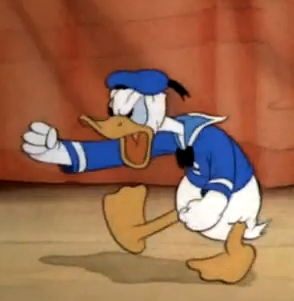 According to our calculations, Donald will be 84 years old this Saturday. Now, we're no experts on waterfowl biology, but that seems like a ripe old age for a duck. Come to think of it, we haven't seen Donald featured in any new films in quite a while. Maybe someone should check in on him to make sure the old bird is doing fine.

Bonus Material: Speaking of fictional animals, regular readers of this newsletter may recall that last week we blew the lid off of the international platypus conspiracy. While we have been patiently waiting for the Pulitzer Prize committee to recognize our investigative reporting, we unearthed a disturbing photo that shows how far the tentacles of this treachery reach. The picture below shows that our very own Chief Compliance Officer Kyrstin Ritsema is an enthusiastic member of the platypus plot. It seems that even our best and brightest have been seduced by the charms of this mythical monster.
Read More >>