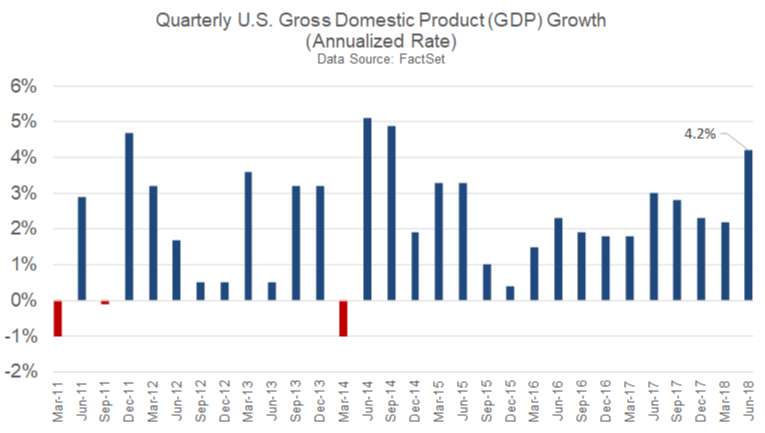 The Commerce Department announced its second estimate for U.S. Q2 2018 gross domestic product (GDP) growth, and the result was positive for the American economy. However, it is important to remember two things about the latest data. First, the number is strong, but as the chart above illustrates, it is not out of the ordinary. Second, the GDP reading is an annualized extrapolation of quarterly growth data. The projections for the full year 2018 are currently at the slower pace of 2.8%, which still indicates a solid economy, but the chart below shows that such growth would not be unprecedented in recent history. We wait to see if future GDP readings can be beat estimates in the last six months of 2018. 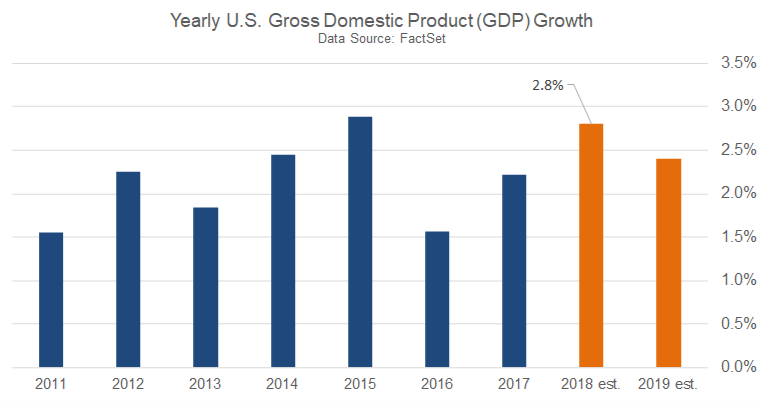 Number of the Week

For the second straight week, the topic of football enters our newsletter. Last Wednesday, former Cleveland Browns linebacker Mychal Kendricks was charged along with an associate in an insider trading scheme. The duo are alleged to have profited to the tune of $1.2 million in 2014 from several illegal stock trades. After releasing Kendricks following the announcement of the charges, the Cleveland Browns admitted they knew of the SEC investigation when they signed him in June, thus providing a sterling example of the football management acumen that has led the franchise to 0 Super Bowls. Kendricks said that he believed that the fancy pedigree of his friend, which included a degree from Harvard and employment as an analyst for Goldman Sachs, meant they wouldn’t get caught. Such misplaced faith in a friend reminds us of the first and most important law of insider trading promulgated by our favorite financial blogger, Matt Levine: