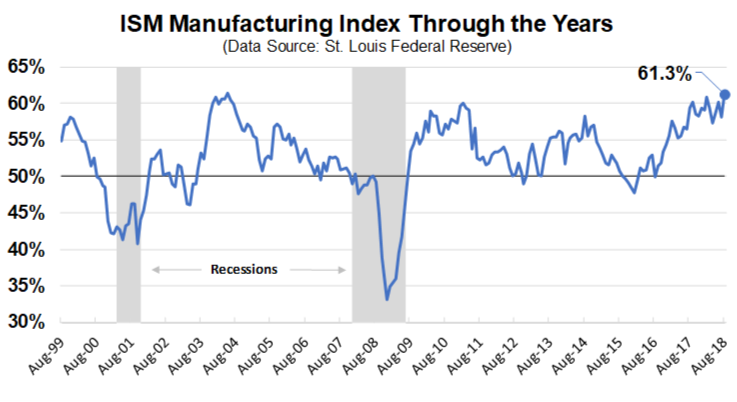 Agitation and anxiety maybe increasing in the political arena, but recent data on the domestic economy has shown the animal spirits have continued to awaken and produce positive results. Last week, the latest reading of the Institute for Supply Management’s (ISM) Manufacturing Index extended this trend. This survey of industry executives is a closely watched gauge of the health of domestic factory output.  For August, the index unexpectedly increased to 61.3%, a 14-year high. Readings above 50% indicate that there is net growth in the sector. The gauge has now indicated expansion for 24 straight months.

16 of the 18 industries tracked in the report indicated growth. The ISM revealed that new orders, employment, and order backlogs all increased in August. However, the escalating trade tensions could be the source of the one negative area of the report, as the number of export orders fell to a 10-month low last month. The pace of growth in both export and import orders has weakened considerably since steel and aluminum tariffs were announced by the U.S. administration this past March, with primary metals being one of the two industries to contract in August.  Overall, as the chart above demonstrates, the index can move in sync with cycles in the broader U.S. economy.