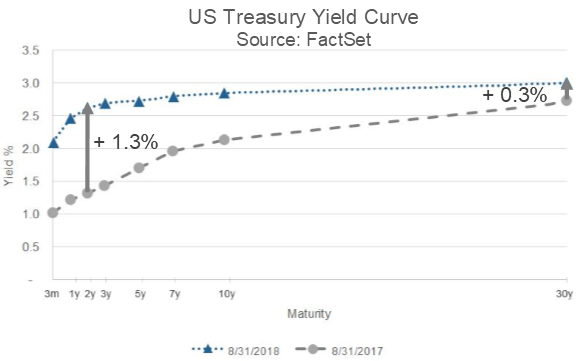 The yield curve has flattened over the past year. While the FOMC has continued to increase the short-term policy rate, it is not the only reason that rates are increasing on the short end of the curve. We will highlight two of them. The first reason is that there is quite a bit of new debt being issued by the US Federal Government in order to fund continuing operations. This is mostly in the form of short-term debt. An excess of supply leads investors to demand higher rates in order to buy up the surplus. 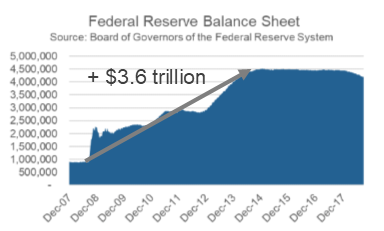 The second is the shrinking of the Fed’s balance sheet. From 2008 through 2017 the Federal Reserve had a bond buying program in place. This was to provide liquidity and to keep rates low to aid in the economic recovery. The balance sheet ballooned from under $1 trillion to a maximum of $4.5 trillion dollars. Over the past year, the Federal Reserve has allowed $260 billion to roll off of its balance sheet. They have done this by ceasing to buy new bonds as old ones mature. This has meant that a large investor has pulled its demand from the marketplace. This leads to a drying up of demand as well. While the shrinking of the balance sheet is a good thing in the long run, in the short term it has caused excess supply. This has contributed to yields increasing. 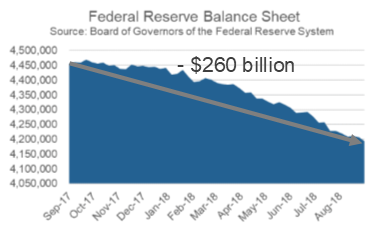