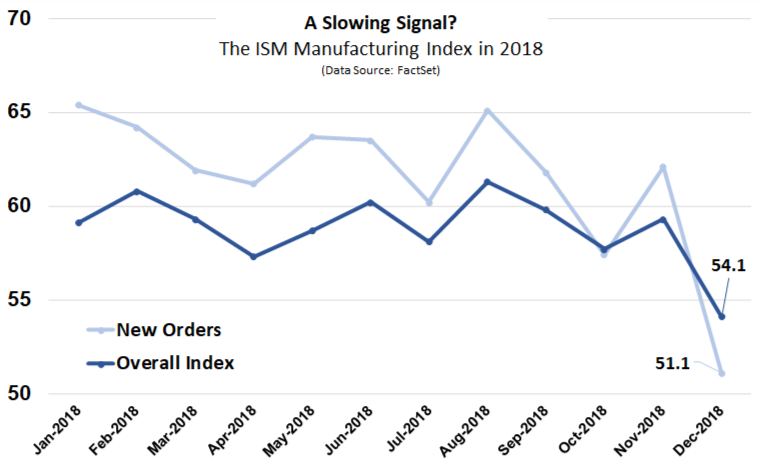 Recently, the U.S. equity markets have undergone so many gyrations and twists that even Chubby Checker would have to say that this is too much. During December 2018 and the first week of January 2019, the S&P 500 index experienced 12 daily moves of at least 1% in magnitude, with the majority those changes to the downside. Much of the anxiety amongst stock traders is focused on whether U.S. economic growth is slowing down. One seemingly strong signal that this could be happening was the release last Thursday of the latest Institute of Supply Management’s (ISM) Manufacturing Index. This closely watched gauge of industrial activity unexpectedly fell to 54.1 in December from 59.3 in November, it’s biggest one-month drop since October 2008. Notably, the “New Orders” sub-component of the index pulled back considerably from its previous month’s reading of 62.1. Now, readings above 50 in the ISM methodology indicate growth in the respective data point, and the overall index has spent an impressive 28 months in an expansionary state. However, the markets are always forward-looking and any clues that factory activity could be slowing down will be noticed. Maybe even more concerning for analysts is the possible effect that the tariff dispute between the U.S. and China could be having on the natural progression of this economic sector. Many economists have questioned whether the current volatility in the ISM index, and in other recent data on manufacturing and trade, has been exacerbated by companies trying to “time the tariffs” - increasing orders in earlier months to avoid the prospect of more punitive tariffs in the future. This manipulation of supply chains makes the data measuring their strength and the trends they produce more unpredictable, and inevitably could make the stock market which tries to reflect the future profitability of these companies more volatile also.