The first full week of March produced the worst five-day stretch this year for the major stock indices. Concerns that the current global economic expansion might be losing steam faster than anticipated at the beginning of 2019 were blamed for the majority of the downturn.  The signals of weakness popped up around the globe last week to worry market analysts.  Domestically, the February jobs data released by the Labor Department on Friday morning did not put traders in a good mood. The headline data point, the gain in nonfarm payrolls, fell short of consensus market expectations by the biggest margin in more than 10 years. Nevertheless, despite the prominent miss, it is important to remember that these monthly numbers can be pretty volatile and that the government report did show encouraging trends in the unemployment rate, underemployment rate, and employee wage growth.

It was more difficult, however, to put a positive spin on the international news. China reported that exports have fallen dramatically from a year ago and cut its official forecast for 2019 GDP growth. In Europe, the President of the European Central Bank Mario Draghi announced that interest rates on the continent would be kept below zero longer than previously expected, due to the persistent anemic growth rates in the region.

Recently, data provider FactSet released information on how this international economic inadequacy could effect the bottom line of the multi-national companies in the S&P 500 stock index. According to the data analyzed by FactSet, S&P 500 companies with more than 50% of their sales in the United States are on pace to see 6.5% year-over-year growth in revenues and 1.0% year-over-year growth in earnings in the first quarter of 2019 (Q1 2019). In comparison, those companies with less than 50% of their sales in the U.S. would only see a 0.7% increase in revenue and a substantial decline of –11.2% in earnings. The global exposure hurts these companies’ earnings in two ways. The slowing international economies have less demand for the goods and services offered, and the strong U.S. dollar means that foreign transactions provide less profit when translated back into the domestic currency. These earnings forecasts have the potential to restrain gains in the companies’ share prices in the near future.

Overall, despite the one down data point last week, the U.S. economy still shows signs of strength. But, as we’ve shown above and mentioned before, the weakness around the globe can have a negative effect on every stock index, international or domestic. 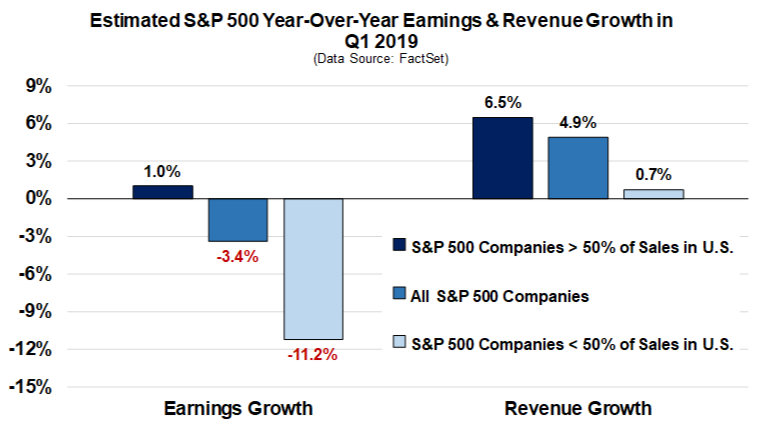