Domestic share prices took a dip on Friday as stock traders reacted to news that traditionally has been a harbinger of a looming economic recession: the inversion of part of the U.S. Treasury yield curve. Normally, if fixed income investors are bullish on the economy and believe that business investment and demand for credit will grow, then they will be more willing to hold short-term bonds in order to capture the higher yields in the near future as interest rates increase.  However, if bond buyers become bearish on the economy, they may believe that interest rates will decline and thus will flock to longer-term bonds in order to lock in the present higher yields. This can cause an inversion in the normally upward-sloping yield curve for government bonds.

Traditionally, the difference in yields between the 10-year and the 3-month Treasuries has been the data point used to trigger this bearish signal.  Last week, demand for longer-term bonds increased significantly after the Federal Reserve lowered its domestic growth projections and indicated no new short-term interest rate hikes were likely forthcoming in 2019.  This pushed yield for the 10-year Treasury slightly below the 3-month Treasury on Friday— yields decrease as demand, and subsequently price, increase. Historically, a recession has followed on average 18 months after such a signal, but it important to remember this is a sentiment indicator of one market sector, not a law of nature. Since the Great Recession, central banks around the globe have kept long-term rates low by buying government bonds, a process called quantitative easing.  So in this unique fixed income environment, it can be difficult to determine what this data forecasts. 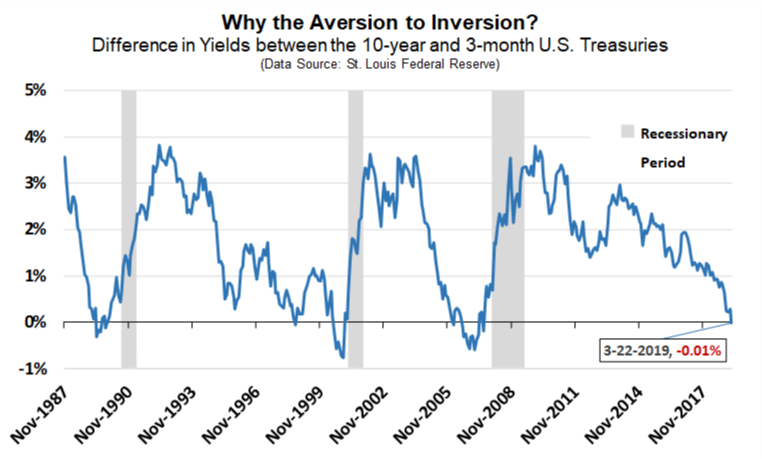