We are heading into corporate earnings season. The first report came out this morning (January 14th) with Citigroup coming in light on revenue by close to -$400 million. Recently, we have seen some significant warning signs from other large players in the global economy, like Apple, Delta Air Lines, Macy’s, and several auto manufacturers.

In addition, the economic data on exports and imports released by the Chinese government this morning is disconcerting, but the volatility in the trade numbers also suggests that some front loading may have taken place before any tariffs were announced. It will take some time to parse out exactly what these numbers mean as they were so far from expectations that it is difficult to make sense of them without further context.

We also turn our attention to Europe to look at the numbers that came out today from Eurostat. Industrial Production in the Eurozone in November was down –3.3% year-over-year (shown in the chart below). Signs of decline can be worrying. What happens if this weakness becomes an actual trend? 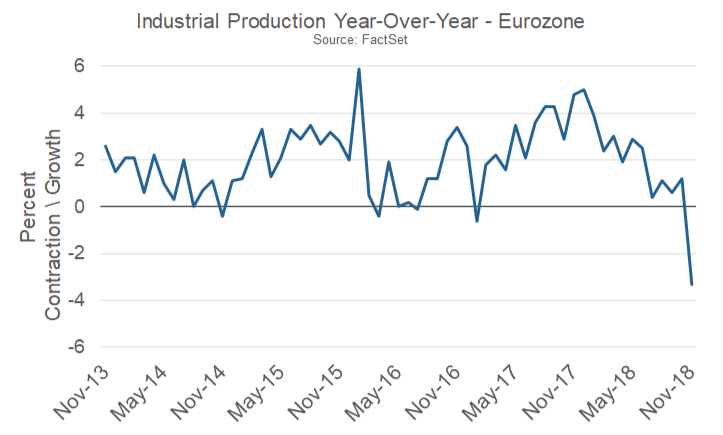 These are some of the global concerns that have been weighing on the market. What we saw in terms of downdraft in stock prices during December was extraordinary. However, to write it off as purely sentiment driven and divorced from market fundamentals would be incorrect.

With earnings season comes management commentary. This will tell us what companies are thinking about and planning for in the near-term future. Expect quite a bit of interest to be focused around the topics of revenue projections and political risk mitigation. Good management teams have a good feel for the pulse of the global economy, and their insights can be invaluable.