The term “API”, or application programming interface, has been bandied about as a buzzword in software circles for almost two decades, but this ubiquitous acronym can also provide a useful framework for understanding why certain companies become valuable in our increasingly complex and computer-dominated world.

First appearing in technical literature in the late 1960’s, an API, essentially, is a contract that a piece of software establishes with the outside world. If it is given certain agreed-upon inputs, the software will provide appropriate outputs, all while hiding the complexity of the computational process from the end user. A good API is often compared to a fine restaurant: a customer places an order for food and soon thereafter receives an appetizing dish, unaware of the commotion and confusion occurring in the kitchen that prepares the meal.

As computing power and network speed has improved, the ability to create a simple API to solve more and more problems has increased, and the companies that provide these APIs have tremendous power and earning potential. For example, Google, in effect, controls the API for searching the World Wide Web. Users supply the search terms, and hyperlinks to web sites are quickly provided back, with the complicated algorithms and hardware needed for this task hidden from view. The effectiveness of the API brings in more users, which brings in advertising revenues, which helps support research to improve the API, which brings in even more users, which brings in more revenues, and so on in a virtuous cycle. Ultimately, the API becomes so powerful that every one else has to adjust to make themselves more useful to the API.

In recent years, many of the companies that generate excitement in the financial press as they enter the public markets are ones that promise the potential of a new powerful API. Will someone be able to abstract away the tedious and cumbersome details involved in real estate transactions with a new, simple API? Will there be one user computer interface that controls all personal transportation? Perhaps, or perhaps not. However, the possibility of new APIs drives much of the speculation in the modern markets. 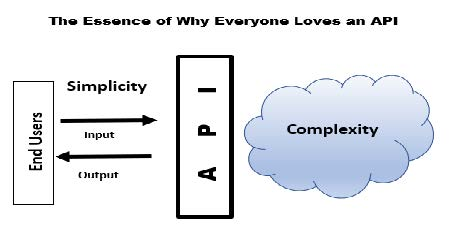