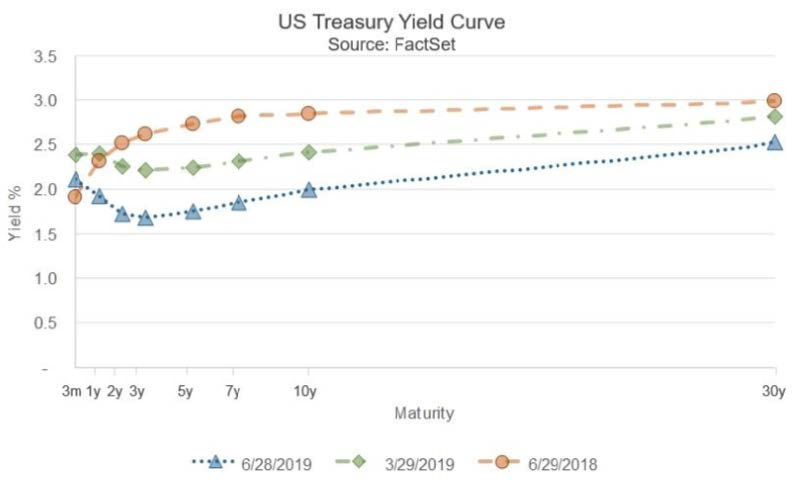 After the Federal Open Market Committee (FOMC) meeting last week, we thought it would be a good time to check in on the shape of the yield curve. The curve inversion has deepened since the end of March. Inversion occurs when the short end of the curve is higher than part of the curve with longer maturities —as demonstrated in the chart above for the 3/29/2019 and 6/28/2019 lines. This means that investors are willing to lock in lower rates for longer now. They do not want to invest in a short term high rate now, then when those bonds come due find themselves having to go out and reinvest that money at a much lower rate in the future. This eats away at future returns, so investors are willing to accept lower returns today for the certainty of future returns.

A yield curve inversion is a pessimistic view of the future. One where monetary policy, as driven by the Federal Reserve, will need to take measures to shore up the economy. The primary way that the Federal Reserve does this is by reducing the federal funds rate which will allow investors to borrow at lower shortterm rates. This can lead the curve to be in a more “healthy” shape—like the 6/29/2018 line in the chart above. With the current depth of the inversion, one Fed Governor even came out and stated that he believed a 50 basis point (or 0.5%) cut would be appropriate. That would end the inversion in short order. At least until market forces move the rest of the curve.