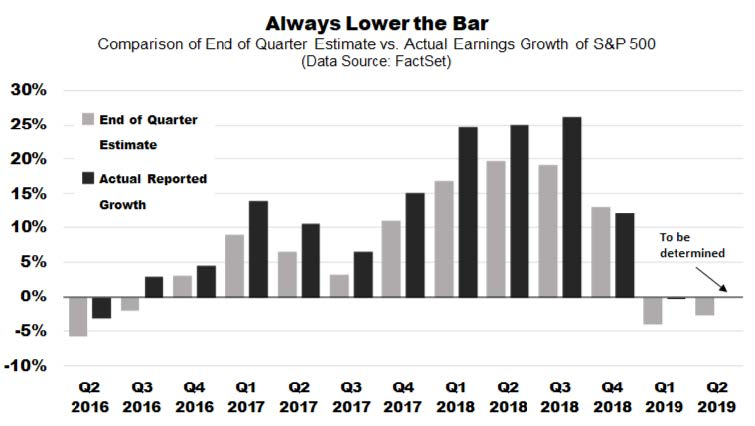 At the end of the second quarter of this year, the consensus estimate of analysts was that quarterly earnings for the S&P 500 declined –2.7% year-over-year. Five of the eleven industry sectors in the benchmark index were predicted to report earnings growth, led by the health care sector. Six sectors were projected to see a decline in earnings, led by the materials and information technology sectors. If the predictions hold true, it will mark the first time the S&P 500 has reported two straight quarters of earnings declines since the first and second quarters of 2016. However, as the chart above illustrates, the actual reported growth numbers consistently surpass estimates, as many companies that set low expectations throughout the quarter end up reporting official data that produces a positive earnings surprise. Over the last five years, actual earnings growth has outstripped estimated values by 3.7%. Even with a low expectations boost, the S&P 500 has definitely lost much of the earnings momentum it gained in 2018 after the corporate tax cuts late in the previous year.

What are the causes of the slowdown? Well, as of July 12, 5% of the S&P 500 have released their Q2 results. Data provider FactSet has analyzed the transcripts of the earnings conference calls of these companies to determine what issues management considers to have a negative impact on their bottom lines. The graph below shows the top ten concerns in Q2 2019 and how often those concerns showed up last quarter (Q1 2019). Weakness in foreign currencies versus the dollar was the top problem for these companies with large international revenues. Concerns about China, whether in regards to tariffs or its domestic economic growth, have increased since last quarter. While worries about basic input costs, like transportation, labor, or raw materials, have diminished somewhat as inflationary pressures remain muted. 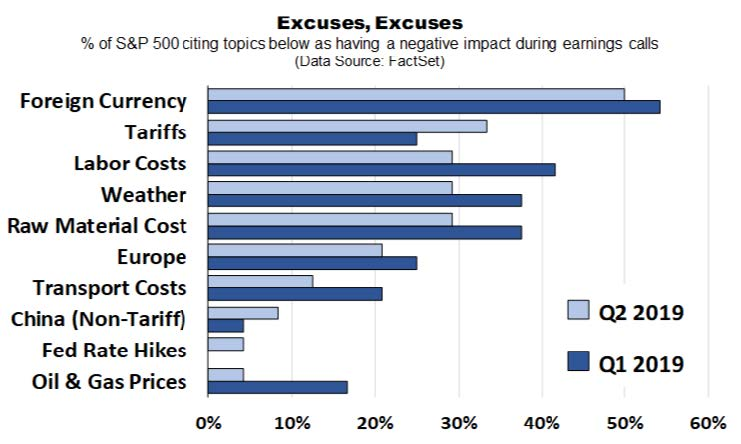