There was a 100% increase in S&P 500 companies citing “ESG” on their earnings calls last quarter according to FactSet. ESG stands for “environmental, social, and governance”. Companies are taking up social causes at break-neck speed, driven by public pressure to be agents of change in the world.

We are mostly concerned by the last factor in ESG, governance. The outsized personalities of founder CEOs of newer technology companies often makes effective governance near impossible. When these CEOs are given control of the voting shares of a company, and the voting shares control the board of directors, and the board of directors are supposed to act as a check on the CEO… I think we can all see the problem.
What were once fairly common rules about governance, e.g. independent board members who do not allow control to be in the hands of one person or a small cabal, have been flouted in the latest start-up boom. We are beginning to see some significant push back by the markets on this. Last year saw the ouster of the original Uber CEO, Travis Kalanick, over some very poor behavior. That poor behavior helped take the sheen off of the initial public offering (IPO) of Uber stock. Since the IPO, shares of Uber are down –27% as of 9/20/2019. Some of this might also have to do with the company’s record rate of spending (or burning through) its cash reserves.

We are seeing the same pattern happening with the newly christened We Company (formerly WeWork). A provider of refurbished office space, We Company has had financial shenanigans in the past, in the form of CEO self-dealing and other activities, coupled with a horrible cash burn rate since inception. This was all glossed over for quite some time with motivating mantras about making the world a better place and growing revenues, but eventually financial realism may be winning the day. As We Co. is attempting to IPO, their valuation has been cut from $47 billion at their last private capital funding to less than an estimated $20 billion as they try to market their shares to the public.

Cash-burning companies are fine when everything is expanding and the world is humming along blissfully. But when any signs of a growth slowdown appear on the horizon, these cash-burn companies can turn toxic. We are cheering the return of financial realism to the markets. 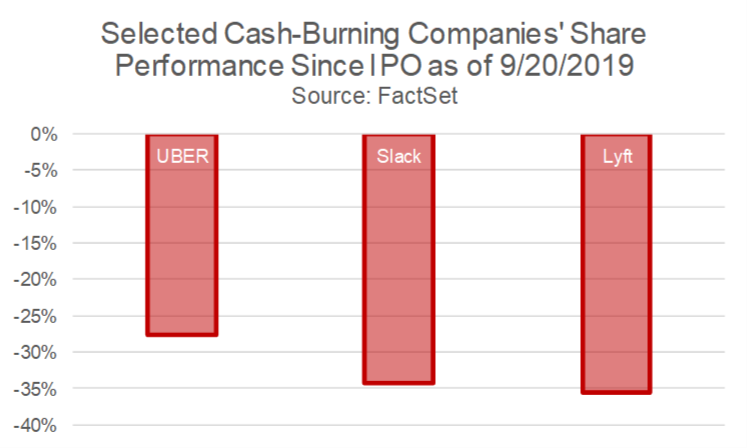