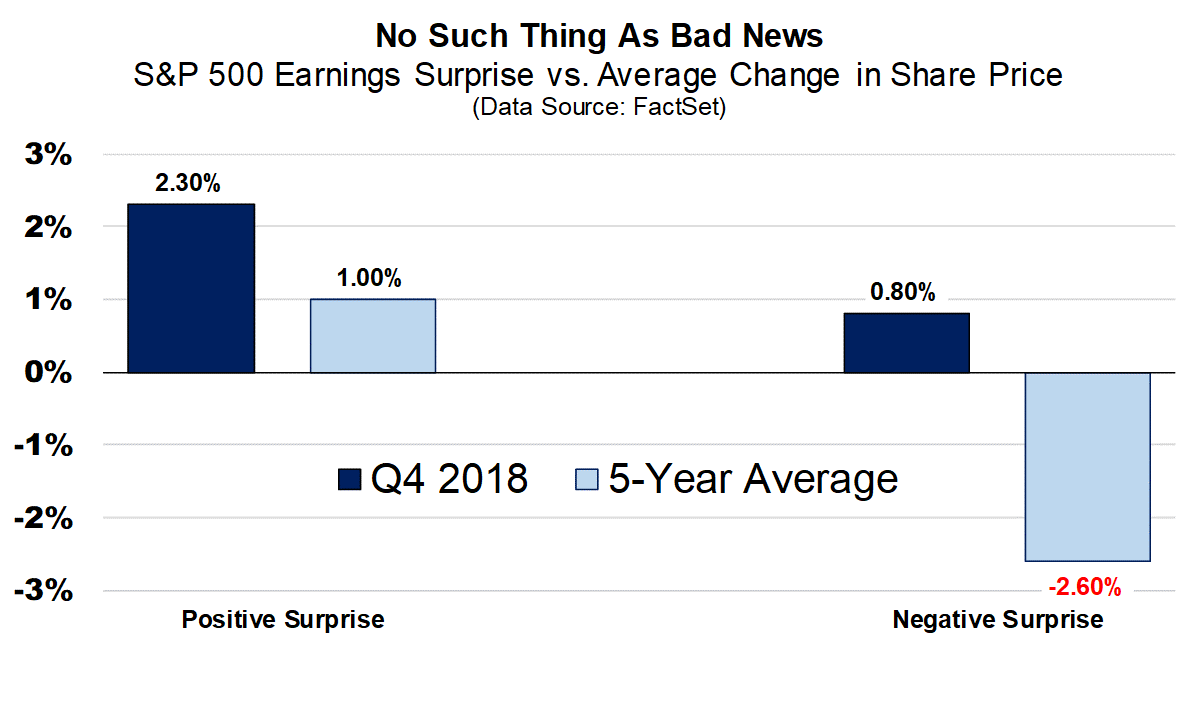 The S&P 500 finished its strongest January since 1987 last week following its worst December since the Great Depression. Last month was also the start of a new corporate earnings season, and the chart above shows that the financial markets were unusually kind in grading companies’ performances.

According to data provider FactSet, businesses that reported positive earnings surprises for the fourth quarter of 2018 (Q4 2018) in January saw their stock prices increase on average by 2.30% during the two days before the data release through the two days after. This far exceeded the 5-year average of a 1.00% boost in price for unexpected good news. In fact, the bad news for bears even extended to companies that disappointed analysts. The chart shows that companies that produced negative earnings surprises still saw their stocks go up 0.80%, when typically such underachievers experience –2.60% declines. What is producing such Panglossian positivity in stocks for 2019?

Well, as always, many variables contribute to the mood of the market at any specific time, but one that is cited very prominently recently is the new attitude of Federal Reserve Chairman Jerome Powell. In particular, his commentary after the U.S. central bank’s monetary policy committee meeting last Wednesday was credited by many as supporting stocks gains for the week. Powell said post-meeting that “further gradual increases” in the Fed’s benchmark short-term interest rate were no longer necessary to prevent the U.S. economy from overheating. In fact, the central bank “will be patient as it determines what future adjustments” are necessary to sustain current growth in the face of unwelcome “financial developments” like the unfolding weakness in Asian and European economic data.

Lower interest rates, along with the Fed’s recent remarks that it will slow down the shrinking of its fixed income balance sheet, certainly can boost the price of stocks in the short term. However, the central bank’s new found bashfulness could indicate that it believes the U.S. economy to be much more fragile than it looks, which could signal long-term pessimism.