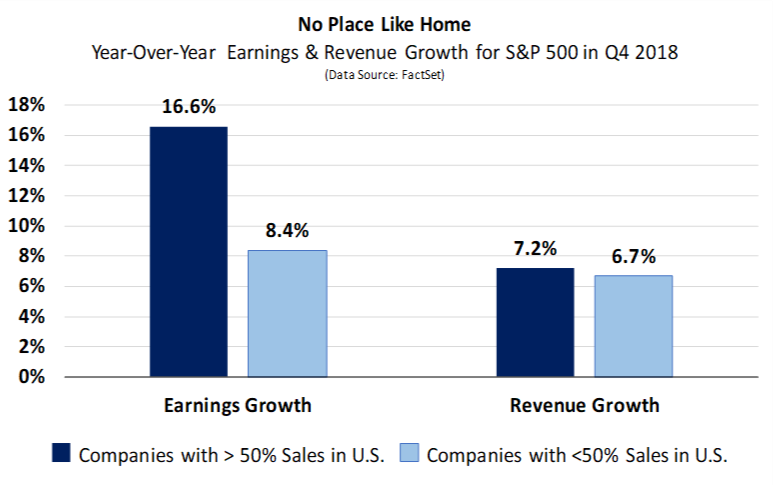 The sputtering from the engine of global growth grew louder last week, as several reports were released that indicated a fading momentum in various economies throughout the world. The latest manufacturing survey data from China was maybe the most influential signal, with this important sector showing the lowest activity in three years due to declining domestic demand and tariff troubles. This Chinese slowdown factored into poor reports around the globe from diminished industrial production in Germany to a reduced forecast for 2019 gross domestic product (GDP) in Australia.

Nevertheless, as our Quote of the Week indicates, recent readings on the U.S. economy still remain strong. However even a large, service-oriented economy isn’t totally immune from growing signs of global weakness. Data provider FactSet analyzed the latest financial reports (covering Q4 2018) of S&P 500 companies to compare the year-over-year growth in earnings and revenue for the large-cap corporations in the index in relation to their exposure to international markets. The companies were divided into two groups: those with greater than 50% of their sales in the United States and those with less than 50% domestic sales. As the chart above illustrates, companies with greater foreign market share saw smaller revenue growth and significantly smaller earnings growth in 2018. The importance of this international influence was credited with being the major factor in slowing down the gains in the S&P 500 last week. Thus, it is always important to remember that no country is an island—well, at least metaphorically, there are many countries that are physical islands.