In our last quarterly commentary, we stated that the cost of inputs to the economic machine were increasing in value possibly leading to future inflation. We noted that the inflation that should be coming had not yet shown up. It is now starting to show up. The March report on the Consumer Price Index (CPI) showed that over the trailing twelve months (TTM) we have seen inflation of 2.6%. Is the economy starting to run hot, and with it, inflation? It is important to note that the numbers from March 2020 include some deflation, as they include the initial cessation in economic activity due to the pandemic.

The relevant question is how high will inflation be allowed to rise before we see the Federal Reserve step in and raise interest rates in an attempt to curb it. Because of the incredible strangeness of 2020, we believe it is important to put the TTM numbers into context. If we neglect the abnormally low 2020 reading for CPI and look at inflation over two years, it is only coming in at a 2.1% annualized rate after the March 2021 reading. This means that on a slightly longer terms basis, inflation is running right at the Federal Reserve’s long-term target rate (approximately 2%).

How will we know if the CPI will continue to accelerate and we start to get inflation at higher levels?
We can look at the Producer Price Index (PPI) as an indicator for future inflation. The PPI is an index of the cost of inputs into the economy, and it has shot up quite a bit over the last few months. We can see in the graph directly below that for several decades in the 20th century the PPI and the CPI were very correlated. 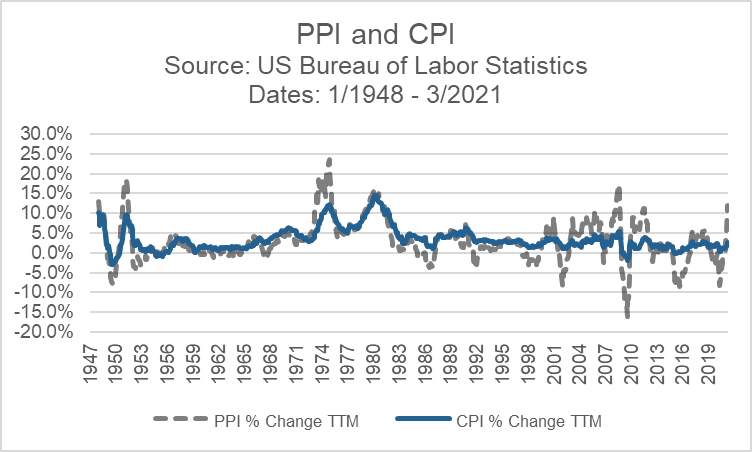 As seen in the chart below, the US economy in the 21st century has become less shackled to the price shocks associated with raw materials (spikes in the gray dashed line), the way it was during the period after WWII through to the inflationary era of the 1970s. This does not mean that there is no correlation, indeed the correlation is still significant, but the magnitude of movements in the CPI vs movements in the PPI has ceased to be useful. 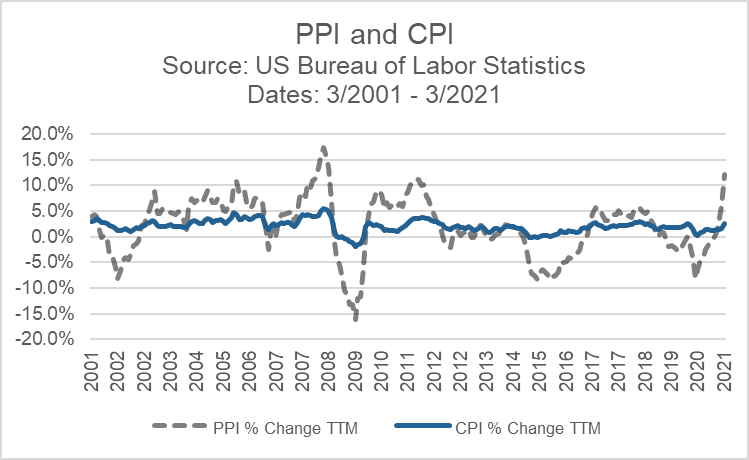 So we are seeing inflation, albeit muted at this point, but the rate of change is increasing. An overweight to equities generally helps to offset the mild inflation that we are currently seeing. Indeed, so far this reporting season with 25% of the S&P 500 reporting, the net profit margin is the third-highest since 2008 according to FactSet Research.

This means that companies have been able to pass along rising input costs to the end consumer. We have seen several consumer staples companies announce price hikes on many of their product lines without a hit to sales. If inflation does get too high then it will not be good for anybody, but we are not seeing that in the numbers at this point.

Quote of the Week

"Some investors may choose to harvest capital gains now, rather than potentially pay a higher rate in the future. However, U.S. taxable domestic investors own only about 25% of the U.S. stock market. The other 75% is owned in accounts that aren’t subject to capital-gains taxes (e.g., retirement accounts, endowments, foreign investors). We would expect opportunistic investors who are unaffected by this proposal to step in and take advantage of lower prices.

History bears this out. There is no relationship between changes in capital-gains tax rates and the performance of the U.S. stock market. For example, the last time capital-gains taxes went up was in 2013, when they rose by nearly nine percentage points. Yet stocks rose 30% that year."