Last week, the S&P 500 advanced over 3% while over 5 million more Americans filed for unemployment benefits. Shares of Amazon hit new all-time highs while the Census Bureau reported U.S. retail sales had their largest monthly decline on record last March. Costco and Procter & Gamble announced that they would increase their yearly dividend while a regional index of factory activity in the Northeast registered its lowest level ever.

It may appear that the coronavirus has had an uneven impact on the various segments of the economy and the financial markets. And if you look above, you will notice that the S&P 600, an index of small American companies, fell by almost –3% last week, an almost mirror image of the large-cap benchmark. Looking at the year-to-date (YTD) returns shows that last week wasn’t an anomaly; smaller companies, which are more sensitive to economic growth rates, have had their share prices fall far more than the biggest businesses.

Many of the largest technology companies entered 2020 cash rich with the ability to maintain at least some of their previous revenue streams as the American public became homebound. Recently, hope that some of the restrictions on commerce will be removed in the coming weeks has bolstered share prices of these companies.

However, even with restrictions removed, overall growth could be drastically reduced for some time. For example, the South Korean government has allowed most businesses to remain open during the pandemic while succeeding in keeping the viral contagion relatively contained. Nevertheless, the chart below shows how the fear of further infection can devastate business revenues. The first confirmed case of the virus in South Korea in late January significantly slowed down foot traffic to the country’s cinemas, but then a small outbreak in mid-February attributed to a unusually contagious “Patient 31” in the media effectively ended movie-going in the country. Korean theatres are now asking for government bailouts even though they were never forced to close by government edict.

So even if governmental restrictions are removed, the reluctance of Americans to resume anything approaching normal levels of consumer spending is conceivable. Such a sustained period of stagnation would then have ramifications that would be felt by even the largest and most well-positioned companies. 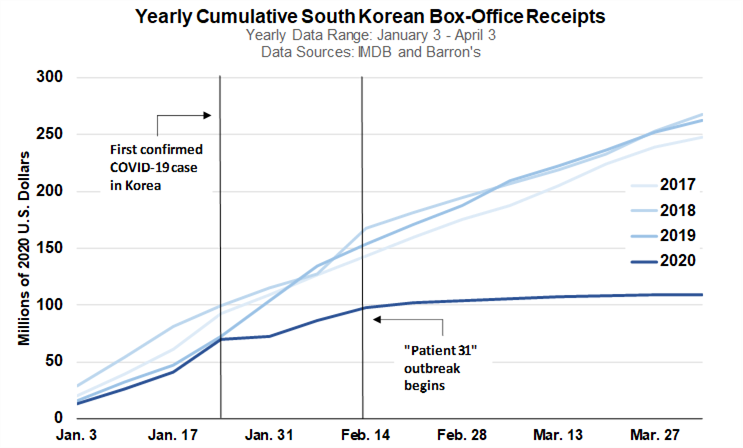