“Caveat emptor” is more than just a phrase from that one episode of The Brady Bunch. Please always be aware of what you are buying. The cacophony to buy the dip in oil became a roaring din on Monday, April 20th, the day before the West Texas Intermediate (WTI) Crude May 2020 futures contracts were set to expire and require physical delivery. Of course due to the downturn in the economy (read as nobody is driving anywhere), the vast majority of storage at the delivery point for those contracts— Cushing, Oklahoma — was already being used, so there was nowhere to put the oil that those contracts buy. This caused panicked selling in the futures market that led to those contracts going negative for the first time ever, heading down to -$37 per barrel. This meant that for every 1 futures contract that was bought on margin (all futures are bought on margin), that party lost their initial investment and now owed $37,000 to their broker—the futures contract size is 1,000 U.S. barrels.

With the belief that the global economy will eventually recover and the demand and price for fuel will grow once again, people are asking how they can profit from oil this low. In this situation, it is important to point out that the financial instruments available to retail investors do not track the price for immediate delivery of oil (called the “spot price”) which is often quoted in the news. These instruments hold oil futures. When these futures approach their due date, they must be sold and new contracts further in the future must be purchased to maintain the instrument’s position in oil. This is called “rolling over” the futures contracts. Now if the market believes that it is much better to get oil in the far future than to get it in the near future because the global economy is currently shut down, then those far future contracts will be more valuable than the near future contracts. Market analysts say that the futures market is in “contango”. Anyone rolling over futures contracts in such a scenario will lose money and experience a negative roll yield. This can cause financial instruments to diverge significantly from the quoted prices of the commodity that they follow.

Below, we show the disparity between the spot price of WTI crude oil and one of the most popular vehicles for investing in oil: the United States Oil Fund (Ticker: USO). The recent turmoil in oil prices has even caused USO to change its original investment mandate, adjusting its oil futures profile in attempt to avoid the negative prices of last week. So again our advice is what was given to the Brady children, “Caveat emptor.” 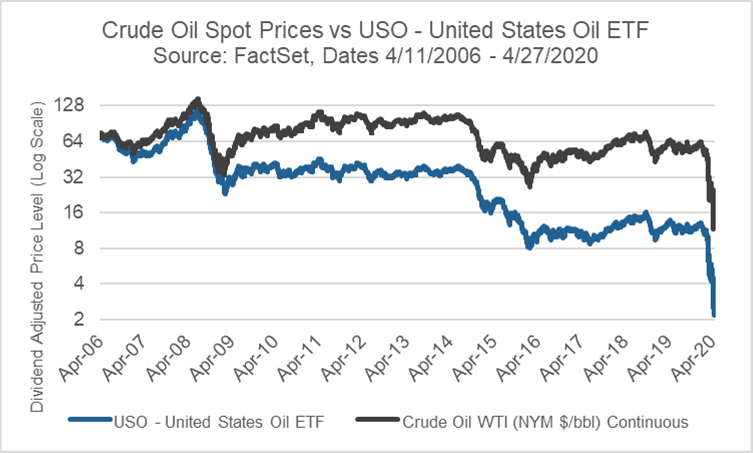