“Taiwan, in particular, represents a single point-of-failure for most of the United States’ largest, most important technology companies,” announced a 2019 Pentagon report on vulnerabilities in the supply chain for advanced microelectronics and their possible national security ramifications. This year’s coronavirus lockdowns and last week’s microchip trade restrictions issued by the Commerce Department against Chinese telecom giant Huawei have only served to elevate these concerns around Taiwan.

The integrated circuit - a silicon wafer teeming with tiny transistors and tremendous computing power - may be humanity’s most amazing feat of engineering. In order to build integrated circuits that are able to serve as microchips in the most advanced modern applications requires an enormous amount of technical expertise and financial capital. Only three companies currently possess the facilities, called “foundries”, to create these devices: Intel, South Korea’s Samsung, and the Taiwanese Semiconductor Manufacturing Company (TSMC).

American-based Intel came to dominate the semiconductor market in the 1980s after IBM outsourced to them the creation of the microprocessor for the first IBM PC. By integrating the design and manufacturing process of their x86 processors and pushing the limits of performance, Intel was able to obtain high margins and almost monopoly-like profits. However, in 1987 to very little fanfare, Morris Chang founded TSMC with the goal of focusing only on manufacturing microchips, allowing other companies to supply their own designs. A new industry of specialized chip designers flourished; and this division of labor between manufacturing and design would prove to be more adept in the following decades at providing the new graphics capabilities and low-power mobile microchips that the marketplace demanded than the more rigid, integrated approach of Intel. From modest beginnings, TSMC was able to equal Intel in manufacturing technology and far surpass them in manufacturing volume. Big-name companies like Qualcomm (QCOM), Nvidia (NVDA), Broadcom (AVGO), Xilinx (XLNX), and Apple (AAPL) all come to TSMC to implement their most advanced designs.

But TSMC’s innovation in such a capital-intensive and essential industry has left the supply chains of the world’s two largest economies in a somewhat precarious state. China doesn’t recognize Taiwan’s independence, but its tech companies, like Huawei, need TSMC to manufacture their microchips; while American tech giants have increasingly relied on a foreign manufacturer that resides in an area fraught with geopolitical tensions. China is currently spending billions in an attempt to produce a premier homegrown microchip manufacturer and the U.S. government is working with Intel on providing a domestic, TSMC-like service; but for the near future, the ability to control access to this Taiwanese company remains a tremendous power to have in global commerce. 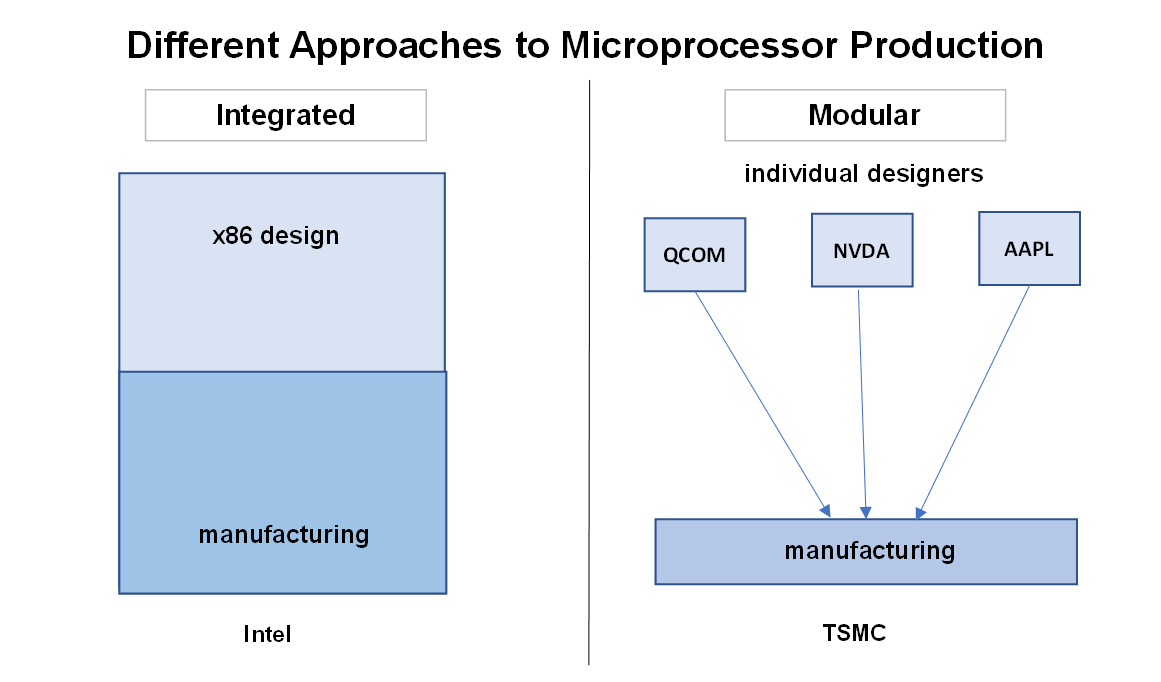