Usually what happens when a recession hits is that unemployment rises and the federal government runs larger deficits to engage in a fiscal response to combat the burgeoning economic crisis. Larger budgets and smaller tax revenues mean deficit spending. We recently saw a thwarting of the natural economic cycle when the last tax cut was put into place followed by a massive increase in government spending.

Unemployment and government spending is set to surge again with the fallout of the COVID crisis. But look closely at the chart below and you can see that government deficit spending was already surging anti-cycle due to the tax cuts and massive new spending programs. While few predicted the COVID crisis (with any sincerity), the United States was already attempting to financially engineer a longer bull market. 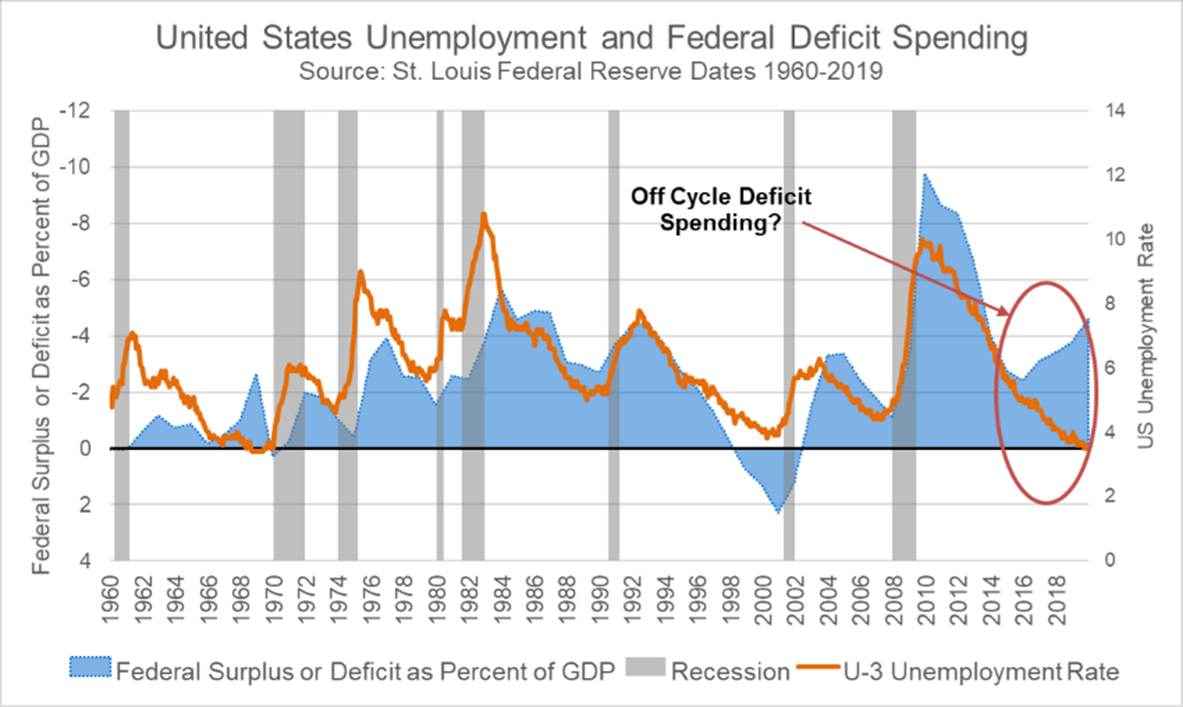 COVID did not in and of itself kill the economy. 2020 and 2021 were shaping up to be difficult years before the economy was shut down. The global economy hit its high water mark for growth in 2017, with the pace of its gains slowing down ever since. The sugar high of the tax cuts and stimulus were wearing off and economic reality was beginning to set in. COVID came in and laid bare all the problems in the economy and threw many more issues into the gumbo.

The Federal Reserve is doing everything it can to throw liquidity at this crisis, but this is turning into a solvency crisis for companies. Highly levered companies are re-levering themselves to get through this crisis. This can end badly if interest rates are not kept artificially low again. The Federal Reserve is stretching its mandate and even doing some things outside of its mandate (like buying junk bond ETFs) in order to try to keep borrowing rates low. How long until we see the Fed begin to buy stocks? The rules put in place to govern the Fed are being ignored, and when you begin to cheat it is almost impossible to stop cheating.