The headlines surrounding the May jobs report were as wild as the actual data presented. Before the Bureau of Labor Statistics (BLS) released their employment summary last Friday, a survey of 78 economists by Bloomberg News made a median projection of 7.5 million jobs lost during the month of May, with the most optimistic forecast in the group still predicting an 800,000 decline. The economists expected the standard unemployment rate (called the U-3 rate) to decline from 14.7% in April to 20%, the highest level since the Great Depression. When the government’s data report was released, the domestic payrolls added 2.5 million new jobs and the unemployment rate actually fell to 13.3%. Domestic stock markets surged at the end of the week thanks to by far the biggest upside surprise in the history of U.S. labor data.

How did the professional prognosticators miss by so much? Well, they are used to predicting job losses due to an economic slowdown, not losses that come about due to the government temporarily sending everyone home and then trying to support the shuttered businesses with novel federal programs. Looking through the data, several commentators mentioned the impact of the Paycheck Protection Program (PPP) in boosting employment numbers. Many small businesses rehired workers in May so that their PPP loans would turn to grants, a factor that would be difficult for even the most skilled practitioners of the statistical arts to model.
In the report notes, the BLS points out that “workers who are paid by their employer for all or any part of the pay period including the 12th of the month are counted as employed, even if they are not actually at their jobs.” Thus idle workers who are supported by PPP are counted as employed. Many analysts pointed out that this methodology artificially boosts employment numbers when the government is basically paying businesses to keep workers on their payrolls. This fact tarnishes the overwhelming positivity of the report’s numbers.

What is going on? Well, below we have included a chart of the monthly changes in U.S. nonfarm payrolls over the last ten years just to emphasize how unprecedented the last couple of months have been to the domestic labor market. The systems created by investors to predict economic trends and by the Federal Government to accurately record economic reality weren’t designed for such an environment. All of these systems are constructed by looking at the past for guidance; but, as the chart shows, that can be of little help now. 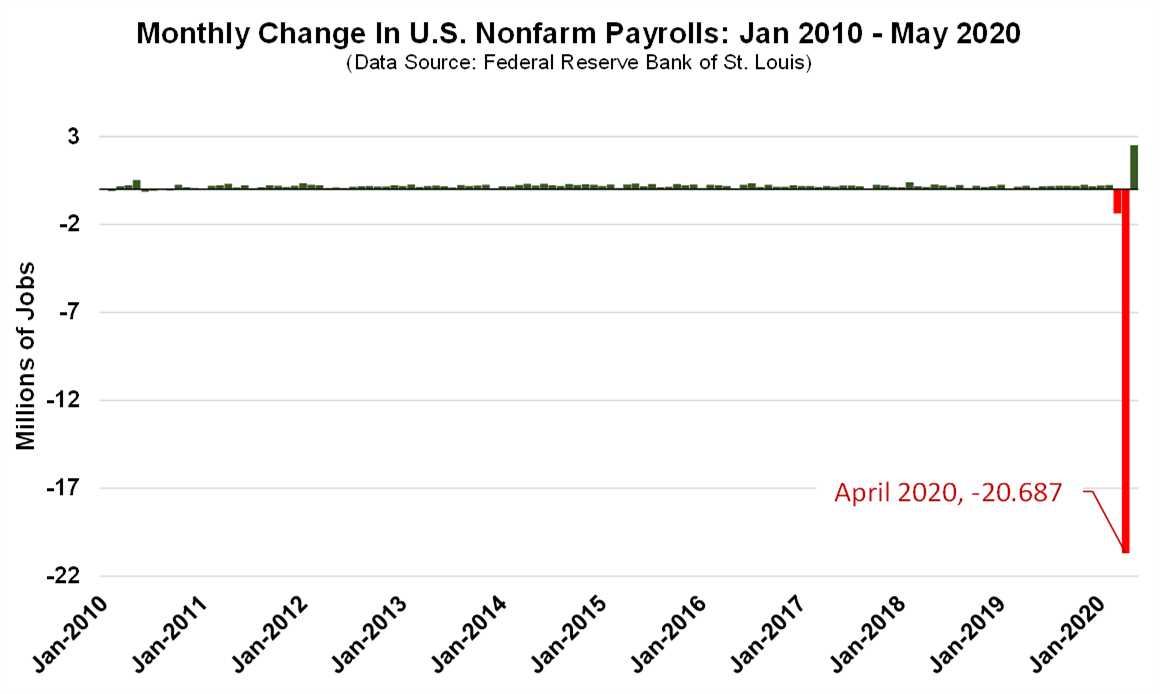 Even in the most placid times of yore, one jobs report was a poor indicator of economic momentum.  We do hope this report is a harbinger of a strong economic rebound; but, as always, we remain vigilant against the extreme volatility and zigzaggery that has come to define this year.