In high school physics classes one of the most important ideas covered is Ohm’s law: the current (I) through a conductor is directly proportional to the voltage (V) across the conductor. It is normally written as the equation V = R*I where R is a constant called the conductor’s resistance. Attributed to work published in 1827 by the German scientist Georg Ohm, Ohm’s law was one of the first quantitative relationships involving the mysterious electromotive force that could be replicated in a laboratory —well, some of the time.  If you had just the right material under just the right conditions, then Ohm’s law held, otherwise it didn’t.  However, researchers liked the linear simplicity of Ohm’s law so much that they soon set about creating devices called resistors that could be counted on to follow the law—doubling the voltage applied to a resistor was sure to double the current running through it. Hundreds of millions of dollars are spent every year by technology companies to create resistors that will be placed in almost every modern device from toasters to spaceships. In fact, none of the complicated electronics that undergird the modern world would be possible if scientists, engineers, and electricians couldn’t rely on countless components obeying Ohm’s simple law.

What does this have to do with financial markets? Well, far more time and money has been spent on deciphering the laws governing stock price movements than understanding electricity. The internet is full of chart patterns promoted as having predictive powers; patterns that use terms like resistance and support levels, ascending and descending triangles, Fibonacci ratios and retracements, all the way down to the lowly vomiting camel. Can these strategies foretell share price movement in the near future? Well, some of the time. Do they represent fundamental immutable laws of nature? Not really, but the case of Ohm’s law shows that the relevancy of these laws may be more mutable than we usually think. Analysts can create trading algorithms that reinforce the validity of a particular chart pattern just like manufacturers can create resistors that reinforce the validity of Ohm’s law. The power of a pricing pattern is really in how many people believe and act as if it has power. 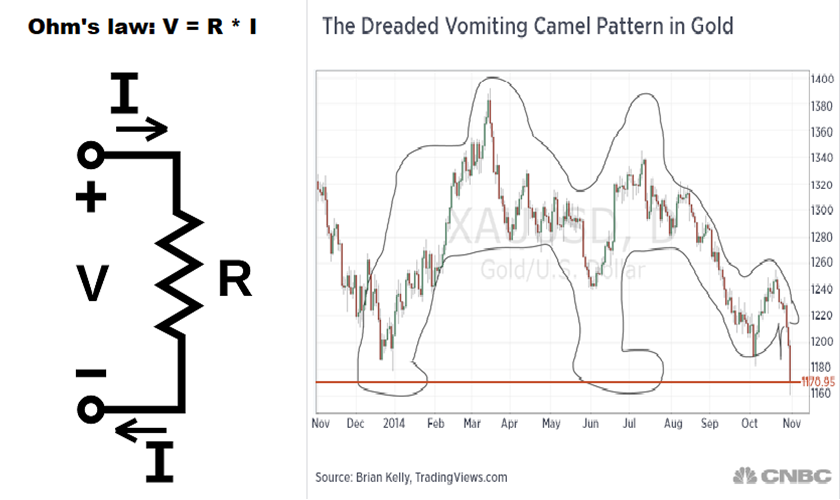 Nevertheless, things aren’t that easy. As the year 2020 has clearly shown, people, and consequently investors, can react in passionate and unexpected ways to events. The physicist Richard Feynman famously quipped, “Imagine how much harder physics would be if electrons had emotions.” We can count on electricity obeying Ohm’s law in a resistor, we can’t always count on stock traders obeying even the most popular pricing pattern.