To err is human, but to prepare for error is ... well, maybe not divine, but it is a pretty important thing to do nonetheless. In that vein, we wish a belated "Happy Birthday" to software engineer Margaret Hamilton who turned 84 last week.

After graduating from high school in Hancock, Michigan, in 1954, Hamilton would go on to study mathematics at the University of Michigan. Through stellar work, eventually she would migrate to MIT where she would head the team tasked with designing the in-flight software for the Apollo moon missions. Hamilton herself would specialize in the areas of error detection and recovery.

During one weekend, she brought her daughter Lauren to the laboratory. While pretending to be an astronaut, the 8-year-old fiddled around with the buttons on the flight simulator causing the system to crash. Hamilton noticed that her daughter had caused the computer failure by pressing a pre-launch button during the simulated flight. Hamilton worried about the possibility of this occurring in a real mission, although most NASA officials believed that a trained professional would never make such an obvious mistake. However, an astronaut did accidentally press this button during the Apollo 8 mission in 1968. A potential disaster was averted after Hamilton and her team were able to upload new navigational data to the spacecraft because she had insisted that they plan ahead for such an unlikely possibility.

On July 20th, 1969, as the Apollo 11 lunar module was preparing to land on the moon, error messages started to reach mission control. A nonessential but malfunctioning radar switch was triggering constant computer alarms threatening to overwhelm the system and abort the mission. Fortunately, an error recovery system designed by Hamilton was able to prioritize tasks and ensure that the most important jobs continued to function while lower priority tasks were eliminated. The computer gave the astronauts the option to continue the mission, they took it and the rest is history.

The examples above of Margaret Hamilton's software engineering skills have relevance to the world of personal finance. First, it is always important to have a plan, even for things that we think won't happen to us. Maintaining personal savings in case of accidents or diversifying portfolios in case of market downturns are important financial error prevention steps. Second, in a world seemingly filled with stressful and chaotic signals, it is crucial that we maintain our main objective. For most people, that is saving for retirement. While other lower priority objectives can fall by the wayside, by continually adding money to our investment accounts we let compound interest work its magic and hopefully come closer to fulfilling that goal. 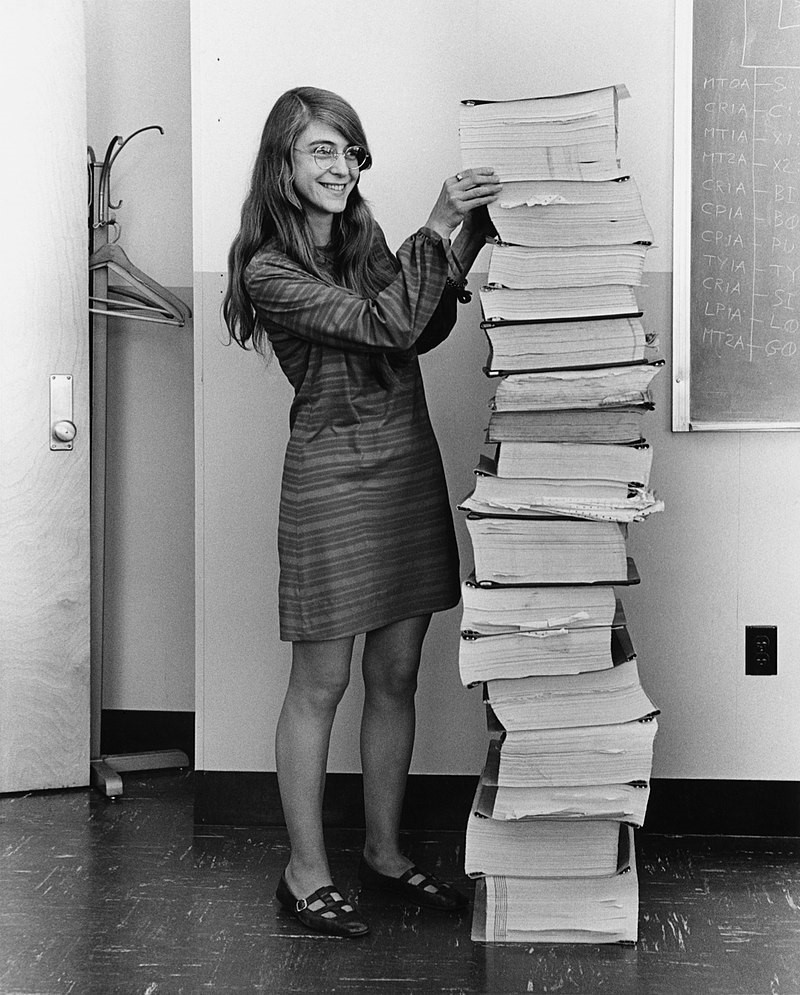 NASA Press Photo showing Margaret Hamilton next to the computer code used to land the Apollo module on the moon. We don't know Ms. Hamilton's height, but we believe the point of the picture was to demonstrate how much code was needed, not how tiny she is.