The pandemic unleashed some unforeseen consequences, both negative and positive on the average household in the US. While there is still much to be done to fully recover, we have seen some things that could point to good outcomes when full mobility has been restored.


During the depth of the pandemic, the personal savings rate spiked to an all-time high (see chart directly below). That has subsided with time, but even the most recent reading from September had the rate at 14.3%, a level that had not been seen since the mid-1970s. The financial planner in us is glad to see so much savings in the face of uncertain outcomes. 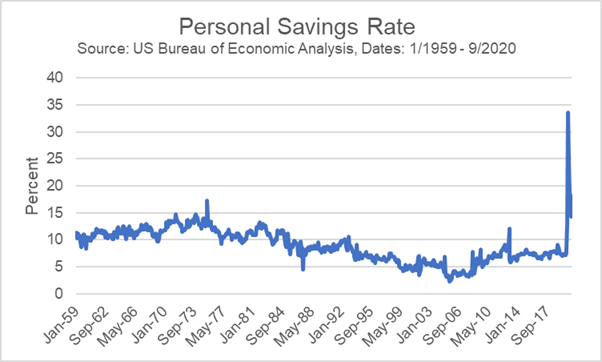 We are not suggesting that everything is rosy, indeed while unemployment claims have been falling there are still 20 million individuals that are receiving some form of unemployment benefits (between state unemployment, pandemic unemployment assistance, and pandemic emergency unemployment compensation). This is down significantly from the 30 million that were receiving benefits in June; but, for the short term, incomes in general have not suffered as greatly as they could when looking at the unemployment stats. 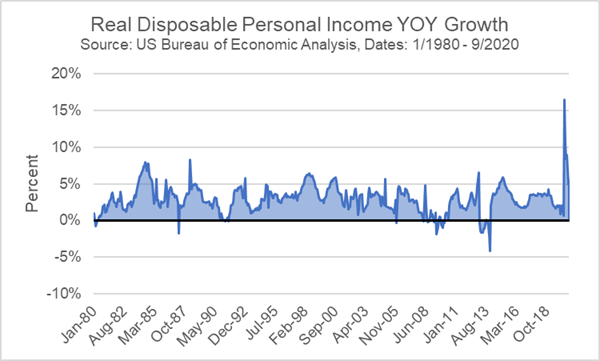 We see (in the chart directly above) the income spike from the CARES act has ebbed, but real growth is still positive for the nation as a whole on a year-over-year (YOY) basis ending September +5.5% higher than 12 months ago. The important part from a financial planning aspect is that households are saving and paying off debt at rates that exceed anything seen before. Low interest rates have been helpful, but banks and credit card companies have been commenting about consumers paying down debt with the extra income earned this year. The percent of household income spent on debt service has fallen to an all-time low since tracking began by the Federal Reserve in 1980 (see the chart directly below). While households may carry relatively higher levels of debt than they did in 1980, the ability to service that debt has improved dramatically since the Global Financial Crisis of 2008-2009. 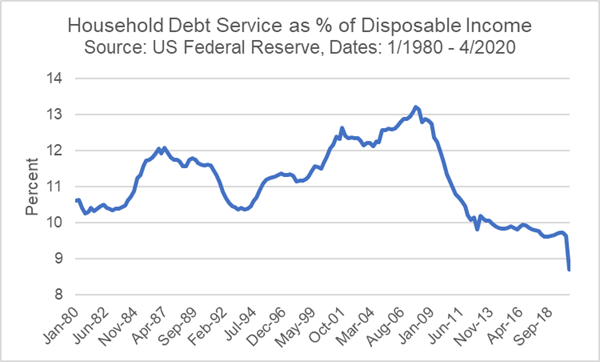 Hopefully this means that when the vaccines hit and the economy and people are ready to reopen fully, they will be doing so from a better position than after the Global Financial Crisis.