The goal of much of modern technology is to create software applications that can abstract away the difficulties and complications of daily life. As the coronavirus curtailed face-to-face interactions in 2020, many of these services became almost ubiquitous. The ability to have food delivered to your house by just pressing a button on your phone or to conduct business meetings without having to trudge through morning traffic became an integral part of many people's lives.  However, no matter how useful and powerful these apps can be, they can't always hide the underlying complexities of the real world, as last week's financial markets demonstrated.

First, a quick excursion into the plumbing of the financial markets. When one party agrees to purchase a security from another party, there is a delay between the agreement to execute the trade and the actual settlement of the trade, when money is exchanged and the transfer of ownership is officially recorded. As of 2017, the settlement period for stock trades was two business days, or T + 2 in the financial vernacular (T = initial transaction day). During this settlement time both parties of the transaction are subject to risks, especially in volatile markets. The seller of the security may not receive his payment on the agreed upon date, a concern called credit risk; while the buyer also bears the risk that he might not receive the security at the given time. Throughout history, market mechanisms have been created and government legislation has been passed to help mitigate these risks. A system of clearing houses has been established to act as intermediaries to guarantee proper processing of trades with the arrangement overseen by the Depository Trust & Clearing Corporation (DTCC) . These clearing houses require the brokers that deal directly with them to post collateral to ensure that transactions are settled. The more imbalanced a broker's position is on a trade in terms of buys or sells or the more volatile the security, then the more collateral that is needed for the markets to function properly. 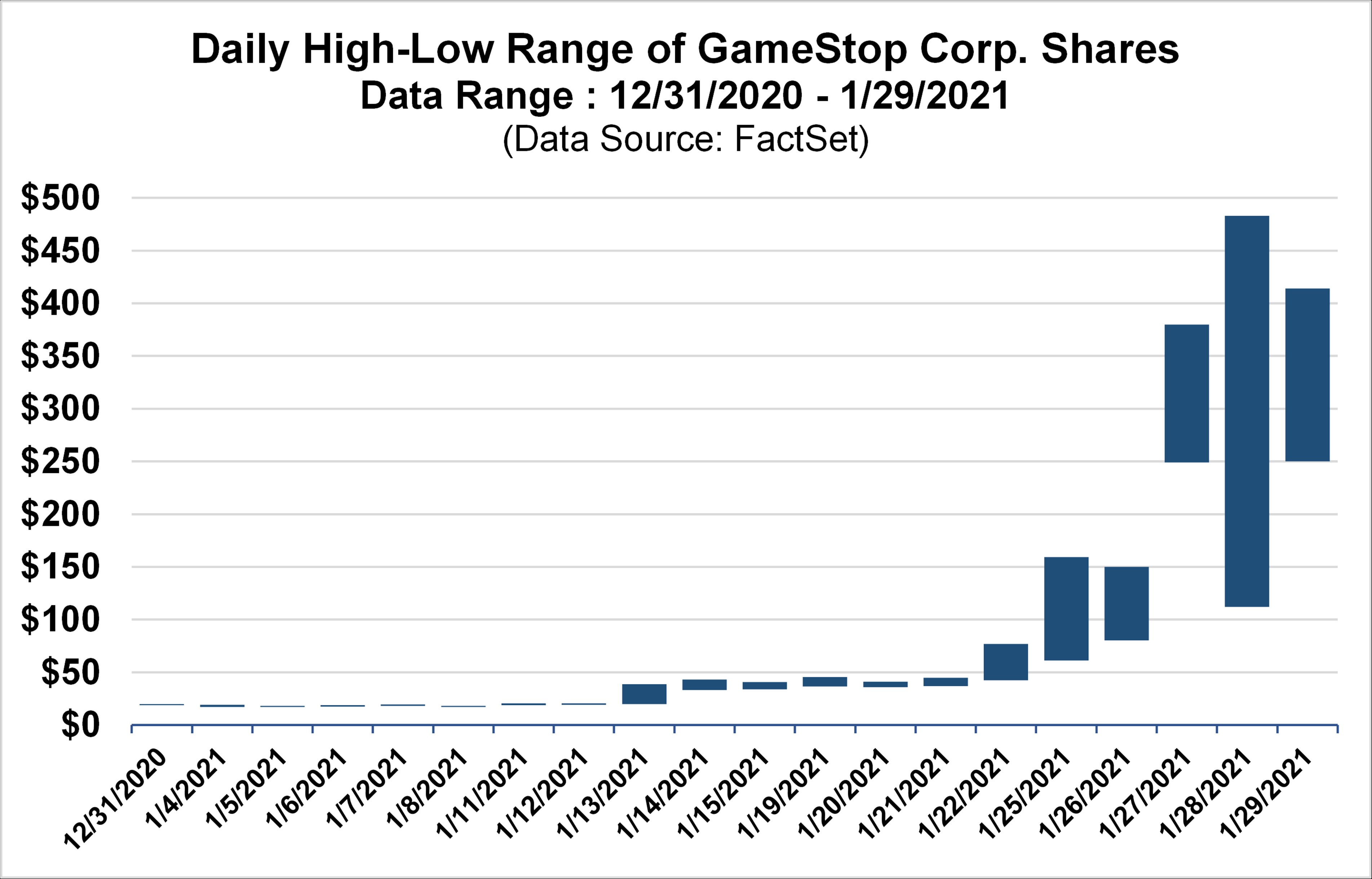 Now, financial services company Robinhood Markets had great success in 2020, as its software app has removed many of the obstacles preventing retail investors from engaging in day trading and option purchasing. Following the company's mission to "democratize finance", Robinhood users were easily able to create leveraged positions in securities that would have been unthinkable for retail investors only a few years ago. And it is this ease of use that put the company in a precarious position as internet forums encouraged traders to purchase shares of heavily-shorted companies, most notably GameStop Corp, at the beginning of this year. GameStop, a seemingly moribund brick-and-mortar retailer of video games, became the most traded stock in the country with wild swings in its share price. On Thursday, January 28th, 2021, shares of GameStop reached a high of $483.00 followed by a low of $112.25 only two hours later after opening the trading day at $265.00. This extreme volatility plus the fact that many of Robinhood's customers were on one side of the trade while using leverage, left the company's brokerage vulnerable. When the DTCC demanded that significantly more collateral was needed to ensure these trades could be properly settled, Robinhood struggled to supply the extra cash. To ensure their liability couldn't increase, Robinhood halted the buying of shares of GameStop and a few other volatile securities. This has caused an uproar throughout social media and may lead to government hearings, as many people look for the nefarious forces ultimately responsible for this disruption in trading. But the search for a bad guy will probably be fruitless, as last week may have just been one of those times when the magical software facades that control much of modern life weren't able to completely contain the real world lurking underneath.
More Posts >>