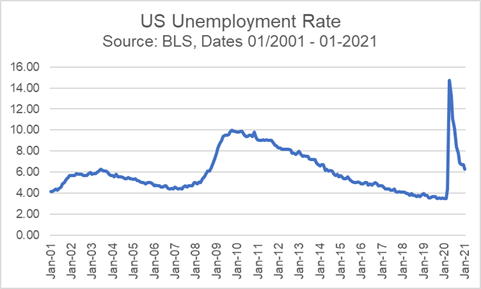 But let’s dig a little deeper into the numbers. The unemployment rate is judged by how many people who want jobs, have jobs. This means that if there is a decrease in the number of people wanting jobs while simultaneously no new employment happens the unemployment rate can actually drop. This was one of the knocks against the post-Great Recession job rate recovery that began in 2009. There was a very slow decrease in the unemployment rate, but that was accompanied by more and more people leaving the workforce. In 2001 there was a labor participation rate of 67%. After the Great Recession, the participation rate fell to down to 63% by the start of 2014 and stayed pretty constant until the COVID crisis hit and the rate dropped again and is now sitting at 61.4% (see the chart below). This is quite a bit of potential earnings that has been removed from our economy. For a full recovery, we need to not only get the unemployment rate back down, but we need to get the participation rate up. These two things must work in tandem. 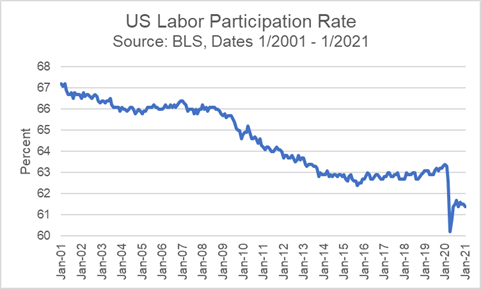 An important input into the potential gross domestic product (GDP) growth rate is labor force participation. So a decrease in the labor force participation rate means that the potential for future GDP growth has been hamstrung. Just a rebound back to 63% would be a positive sign, but it would be great to see us back up at the 65% level. Remember that as of January 15th, there were roughly 17 million people receiving some form of unemployment assistance between State and special Pandemic Unemployment benefits. That is still significantly up from the roughly 2 million who were receiving benefits prior to COVID, though down significantly from the 32 million who were receiving benefits at the height of the crisis.
More Posts >>