We can't let September pass without mentioning that it was during this month way back in 1944 that Superman's greatest adversary was introduced: Mister Mxyzptlk. (Although the name might look intimidating at first glance, it is really quite easy to pronounce once you realize that the y is silent, the z is the beginning of a nasal diphthong, and the stress is placed on the penultimate syllable.)

Anyway, Mr. Mxyzptlk (or Mxy for short) was an imp from the fifth dimension who would periodically appear in our world to bedevil Superman. The only way the Man of Steel could dispatch Mxy was by tricking the little guy into saying his name backwards. Superman was reduced to such shenanigans because Mxy had a significant two-dimensional advantage over our 3-D superhero in any direct confrontation.

An analogy can show why this dimensional advantage was so important. Suppose regular old three-dimensional you had to do battle with a one-dimensional creature. Even if this creature was some sort of superstring supplied with powers from our yellow sun, you would still have the upper hand.  You could go right and left or up and down while the string could only move straight ahead. With two extra dimensions to work with, it would be pretty easy to kick the string's butt.  Then again, it is probably mathematically impossible for 1-dimensional creatures to even have a backside, so I'm not sure exactly what you would be kicking. Nevertheless, there is an important point to be made.  And it is this life lesson I wish to impart to our readers : Like an army positioned on higher ground or a boxer blessed with a longer reach, existing in a higher dimension is always an advantage in a fight. 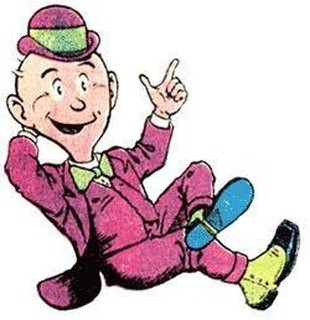