With office Christmas party season approaching, we thought the following rather obscure word might be of some future use to our readers:

Latibulate (verb): to hide in a corner at a party or social event. From the Latin word for a hiding place latibulum.

The shy and introverted may be comforted to know that the ancient Roman roots of this word indicate that wallflowers have existed and thrived for millennia. Indeed every social function since the dawn of time has featured latibulators lurking in the shadows, usually around a table with punch and cookies.

Although latibulate may sound too old-fashioned to use nowadays, there have been several attempts by writers in recent history to popularize the word with the public. In fact, did you know that in the first draft of the screenplay for the 1987 film Dirty Dancing, Patrick Swayze's character interrupts the talent show in the final scene to announce, "I'm very displeased with this young lady's latibulation." Unfortunately, during later rewrites the line was changed to "Nobody puts Baby in a corner" because the screenwriters thought it was more pleasing to the ear. Well, I guess we will just have to agree to disagree about that. 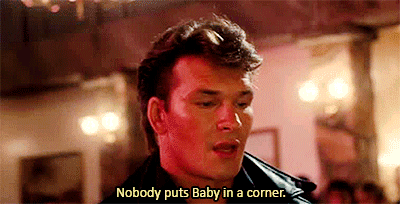