As a person of prominence and a pillar of the community, this writer feels obligated to help my fellow citizens during this time of need. So I’ve decided to throw my hat into the ring and run for political office. And I’m surprised at the feedback I’ve received as I’ve delivered my campaign speeches across this great land.  The most common response after hearing me talk has been  “that bumpkin must have just fallen off the turnip truck.”  (Bumpkin, I believe, is a colloquial mispronunciation of the word pumpkin, a nickname given to me by the voters probably because I possess popular pumpkin properties like pluckiness and persistence.)

Now, the first time I heard this response, I thanked the voter for their concern but assured them I had not fallen off a turnip truck. However, this reply is so consistent and emphatic after every campaign stop, I now realize that this must be an everyday hazard in the lives of the common people. Thus the first mission of my administration will be to enact a proactive policy that will increase funding for security restraints on not just turnip trucks, but also yam wagons, cucumber conveyors, and various other miscellaneous methods of tuber transportation. My dream is that never again will some one be asked if they just fell off the turnip truck because such an accident will be unthinkable.

And once that is complete I will move on to the voters second concern, which was something about some screws being loose... 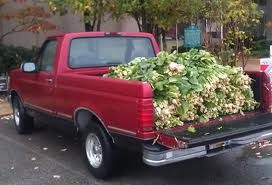 First priority of my administration will be to properly secure vehicles like the one pictured above.