New barriers have been broken in the field of critter communication, according to a recent paper published by scientists at the University of Veterinary Medicine in Vienna, Austria. The researchers claim to have developed a tool that can record and interpret the sounds of mice. When placed in front of the vocal vermin, the ultrasonic listening device parses its pipsqueakery and then deciphers the subject's mousy mood according to advanced algorithms. Apparently, very little progress was made in this noble endeavor until the researchers found their rodent Rosetta Stone - they discovered that the phrase "Hickory Dickory Dock” is  mousespeak for “Hey, buddy, do you happen to know what time it is?” 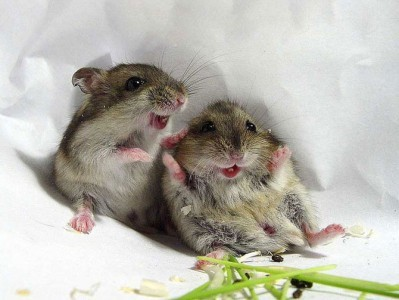 Thanks to the wonders of science, we now know with absolute certitude that these two mice are reminiscing about that time they partied with Speedy Gonzalez on Spring Break in Acapulco.
Read more >>