While perusing the latest issue of USA Today or the Journal of Quantum Information, you may have come across the term "Schrodinger's cat" and wondered, "What is that all about? " Well, this section of the newsletter was specifically designed to settle  such questions.

Of course, we all know that Schrodinger was that blond-haired boy that played the piano in the Peanuts comic strip. And it was shortly after Garfield skyrocketed to fame that the writers of Peanuts worried that their Snoopy-centric comic was out-of-touch with a world now captivated by feline funnies. So Schrodinger was given a pet cat. Unfortunately, fans of the comic found the new character quite derivative, since all Schrodinger's cat seemed to do was eat lasagna and complain about Mondays. The uproar was so great that a story line was created where the nefarious Great Pumpkin trapped Schrodinger's cat in a box with a vial of deadly poison. Then two versions of the comic were created: one where Schrodinger's cat survives the trap and one where it perishes. A vote by the comic's readers was to determine which version was to be ultimately published. Thus, we arrive at the situation that people to this day still find interesting: Schrodinger's cat seemed to be simultaneously alive and dead with only reader interaction able to resolve the apparent paradox.

Since this is a family newsletter, we won't divulge the final fate of Schrodinger's cat, but Peanuts fortunes did improve. It was only shortly thereafter that a brash, young iconoclast named Marmaduke taught a divided country how to laugh again, and the world was made safe for canine comics once more. 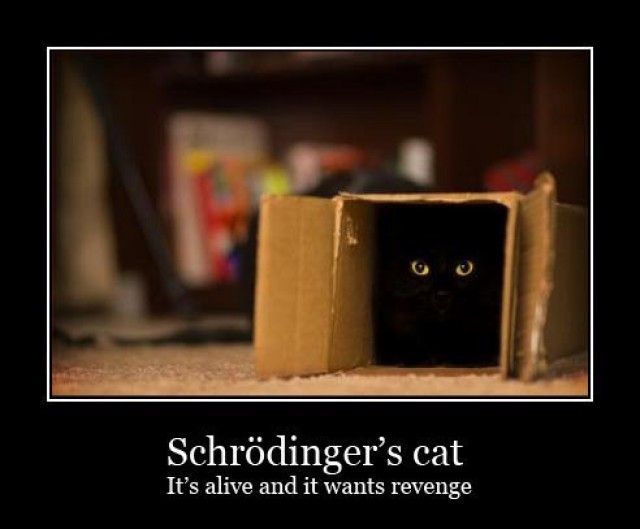 Schrodinger's cat - The quantum cat that wasn't all that.
Read More >>