Now these would be notable notches on anyone's CV, but surely there are other ancient Irish saints with similar accomplishments.

Take for example the two 6th-century Hibernian holy men St. Finnian and St. Columba. Around 560 AD, Finnian came into possession of a rare prayer book. His student Columba borrowed the book and painstakingly copied the manuscript, with the intention to keep the duplicate for himself. Finnian thought this was theft and demanded that Columba return his copy. Believing his actions to be just, an enraged Columba incited a rebellion against Finnian's monastery in the Irish countryside which culminated in the Battle of Cúl Dreimhne in 561 AD. Columba's forces were defeated and he was eventually exiled to Scotland, where he would become the first person to ever see the Loch Ness Monster. Hmmmm, disputes over copyright law and sea serpent sightings -- upon further reflection, it now makes sense why St. Patrick was made the patron saint of Ireland. 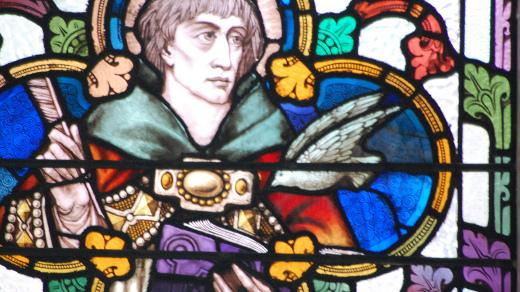